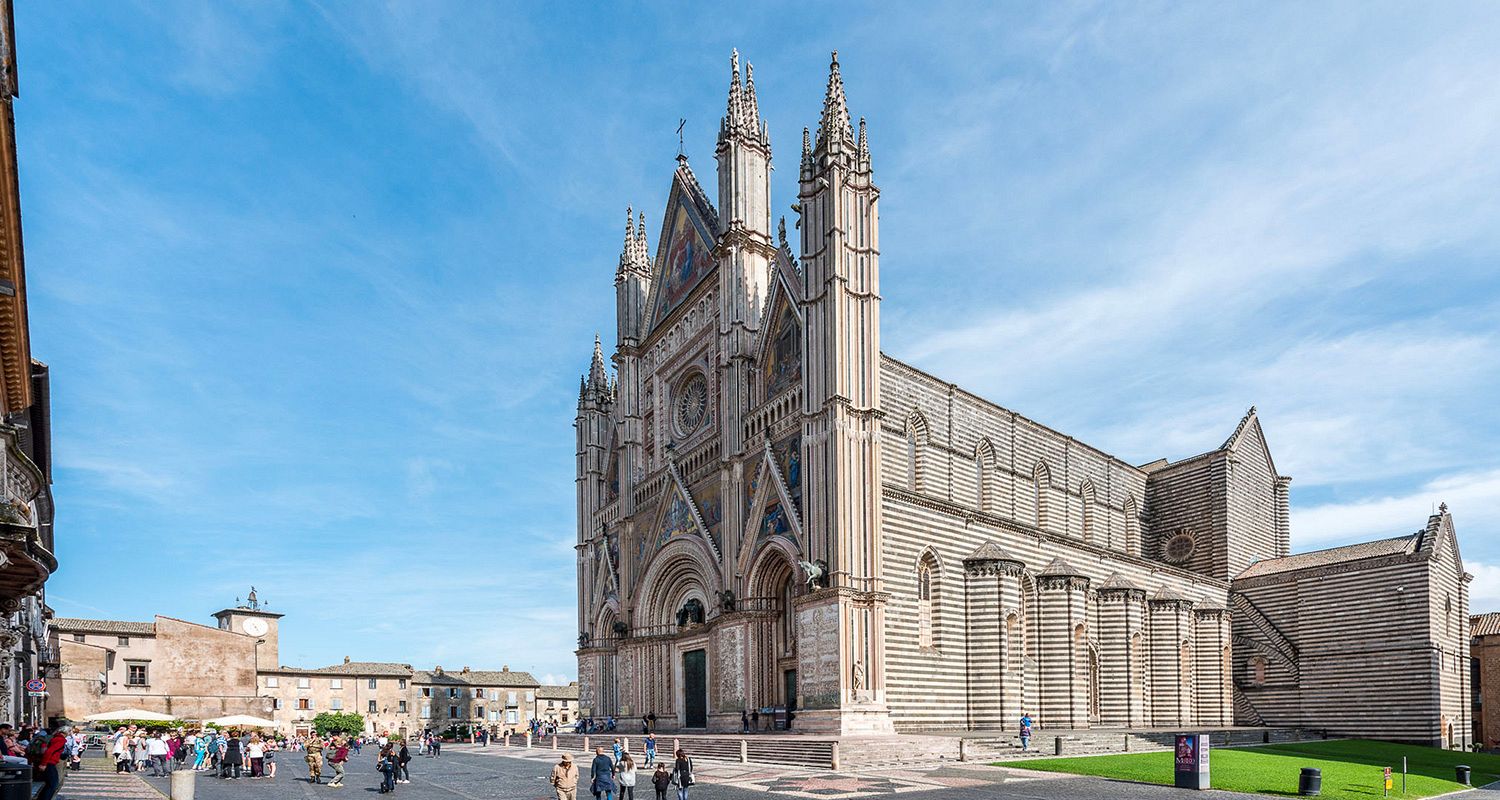 From Florence to Rome with stop in Orvieto

Your driver will pick you up at your address in FLORENCE
to drive you in to ROME with stop in ORVIETO.

Orvieto is a city in southwestern Umbria, Italy situated on the flat summit of a large butte of volcanic tuff. The site of the city is among the most dramatic in Europe, rising above the almost-vertical faces of tuff cliffs that are completed by defensive walls built of the same stone.

The ancient city (urbs vetus in Latin, whence "Orvieto"), populated since Etruscan times, has usually been associated with Etruscan Velzna, but some modern scholars differ. Orvieto was certainly a major centre of Etruscan civilization; the Archaeological Museum (Museo Claudio Faina e Museo Civico) houses some of the Etruscan artifacts that have been recovered in the immediate neighbourhood. An interesting survival that might show the complexity of ethnic relations in ancient Italy and how such relations could be peaceful, is the inscription on a tomb in the Orvieto Cannicella necropolis: mi aviles katacinas, "I am of Avile Katacina", with an Etruscan-Latin first name (Aulus) and a family name that is believed to be of Celtic ("Catacos") origin.

Orvieto was annexed by Rome in the third century BC. After the collapse of the Roman Empire its defensible site gained new importance: the episcopal see was transferred from Bolsena, and the city was held by Goths and by Lombards before its self-governing commune was established in the 10th century, in which consuls governed under a feudal oath of fealty to the bishop. Orvieto's relationship to the papacy has been a close one; in the tenth century Pope Benedict VII visited the city of Orvieto with his nephew, Filippo Alberici, who later settled there and became Consul of the city-state in 1016.

From 1201 Orvieto governed itself through a podestà— who was as often as not the bishop, however, acting in concert with a military governor, the "captain of the people", but bitter feuds divided the thirteenth-century city. Some of the families traditionally associated with major roles in Orvieto’s history are: Monaldeschi, Filippeschi, Alberici and Gualterio, of whom only the Alberici and the Gualterio have survived to the present day. The city became one of the major cultural attractions of its time when Thomas Aquinas taught at the Studium. A small university (now part of the University of Perugia), had its origins in a studium generale that was granted to the city by Pope Gregory XI in 1736.

The territory of Orvieto was under papal control long before it was officially added to the Papal States (various dates are quoted); it remained a papal possession until 1860.

Orvieto is noted for its Gothic cathedral, or duomo. The church is striped in white travertine and greenish-black basalt in narrow bands; its design has often been attributed to Arnolfo di Cambio, but the prevailing modern opinion is that its master mason was an obscure monk named Fra' Bevignate from Perugia; construction began in 1290. The façade (illustration, right) is particularly striking and includes some remarkable sculpture by Lorenzo Maitani (14th century). Inside the cathedral, the Chapel of San Brizio is frescoed by Fra Angelico and with Luca Signorelli's masterpiece, his Last Judgment (1449-51). On the left side of this chapel are the tombs of the Gualterio family.

Orvieto has long been in papal territory. Pope Boniface VIII was from Orvieto and donated statues of himself at the main city gates, which earned him some criticism from his many enemies. During the sack of Rome in 1527 by the Holy Roman Emperor Charles V, Pope Clement VII took refuge at Orvieto. Fearing that in the event of siege by Charles' troops the city's water might prove insufficient, he had a spectacular well (the Pozzo di S. Patrizio or "Well of St. Patrick", so called because this Italian expression, inspired by medieval legends that St. Patrick's Purgatory in Ireland gave access down to Purgatory, is used to indicate something very deep) constructed by the architect-engineer Antonio da Sangallo the Younger. The central well shaft was surrounded by ramps in a double helix. These ramps were each designed for one-way traffic, so that mules laden with water-jars might pass down then up again unobstructed. An inscription on the well boasts that QUOD NATURA MUNIMENTO INVIDERAT INDUSTRIA ADIECIT ("what nature stinted for provision, application has supplied").

Orvieto is also home to Etruscan ruins and the remnants of a wall that enclosed the city more than 2000 years ago. At the foot of the butte, surrounded by peach and apple trees and a vineyard, the Etruscan necropolis of Crocefisso di Tufo counts a hundred or so chamber tombs laid along a rectangular street grid.

The city of Orvieto has long kept the secret of its labyrinth of caves and tunnels that lie beneath the surface. Dug deep into the tuff, a volcanic rock, these hidden and secret tunnels are only now open to view through guided tours. Their spectacular nature has also yielded many historical and archeological finds.
The underground city boasts tunnels, galleries, wells, stairs, quarries, cellars, unexpected passageways, cisterns, superimposed rooms with numerous small square niches, detailing its creation over the centuries. Many of the homes of noble families were equipped with a means of escape from the elevated city during times of siege through secret escape tunnels carved from the soft rock. The tunnels would lead from the city palazzo to emerge at a safe exit point some distance away from city walls.

Palazzo del Capitano del Popolo is a simple building that still maintains an impressive grandeur. Work on the construction of the palazzo began in the 13th century on an area that had been occupied since 1157 by the Papal Palace built under the reign of Pope Hadrian IV.
The original Palazzo del Capitano was a single ground floor loggia that was used as a market place or for meetings, from which the magistrate would speak to the citizens. This was where the surrounding lords or representatives of vanquished cities came to pay their allegiance to Orvieto.
The structure was enlarged within ten years of it having been completed and in 1315 the bell tower was added and in the subsequent year a great bell was hung there. The upper part of the structure was covered in 1472 and the large hall divided into two rooms, one large and the other small. The larger of the two occupied an area that corresponds approximately to the room known today as the Sala dei Quattrocento. Subsequently, the building functioned as a residence for the Capitano del Popolo, the Podestà and the Signori Sette.
From 1596 one of the lower section rooms housed the Studium, which had been re-instituted a few years earlier by Lorenzo Magalotti. Students of law, theology and logic came here to study twice a day, each time the bell of Palazzo del Popolo rung, until 1651. Few records exist of this ancient university appear after this date. Some sources indicate that it dates back to 1013 and had connections with names such as the Benedictine monks Graziano and Gozio of Orvieto.

In Piazza Cahen stands the Fortezza dell'Albornoz. It was built by order of the Spanish Cardinal Albornoz under orders from Pope Innocent VI and designed by condottiero and military engineer Ugolino di Montemarte. The Albornoz fortress stands on an area that was once occupied by a temple, known by the Etruscan name of Augurale. Originally known as the Rocca di San Martino, construction on this massive fortress started either in 1359 or 1353 near the town’s cemetery. Its aim was to allow the Church a secure site in the city and allowing the Cardinal and his captains to consolidate their recent military victories.
The original square plan of the fortress was flanked by a small building near the main entrance and surrounded by a moat, which was only accessible by the drawbridge. However, the Rocca was almost completely razed to the ground in 1395 and successive attempts to rebuild it were unsuccessful. The fortress was finally rebuilt during the mid-15th century using original plans and an additional circular line of fortifications. After the Sack of Rome at the end of 1527 Pope Clement VII took refuge in Orvieto. To ensure that the city would be sufficiently supplied with water in the event of a siege, he gave orders for the digging of the now famous artesian well Pozzo di San Patrizio (1528-1537). For added security, the pope ordered that a second well be dug to supply the fortress alone.

Proceed to ROME, end of our services.
NOTICE: This transfer tour can be done also in the opposite way