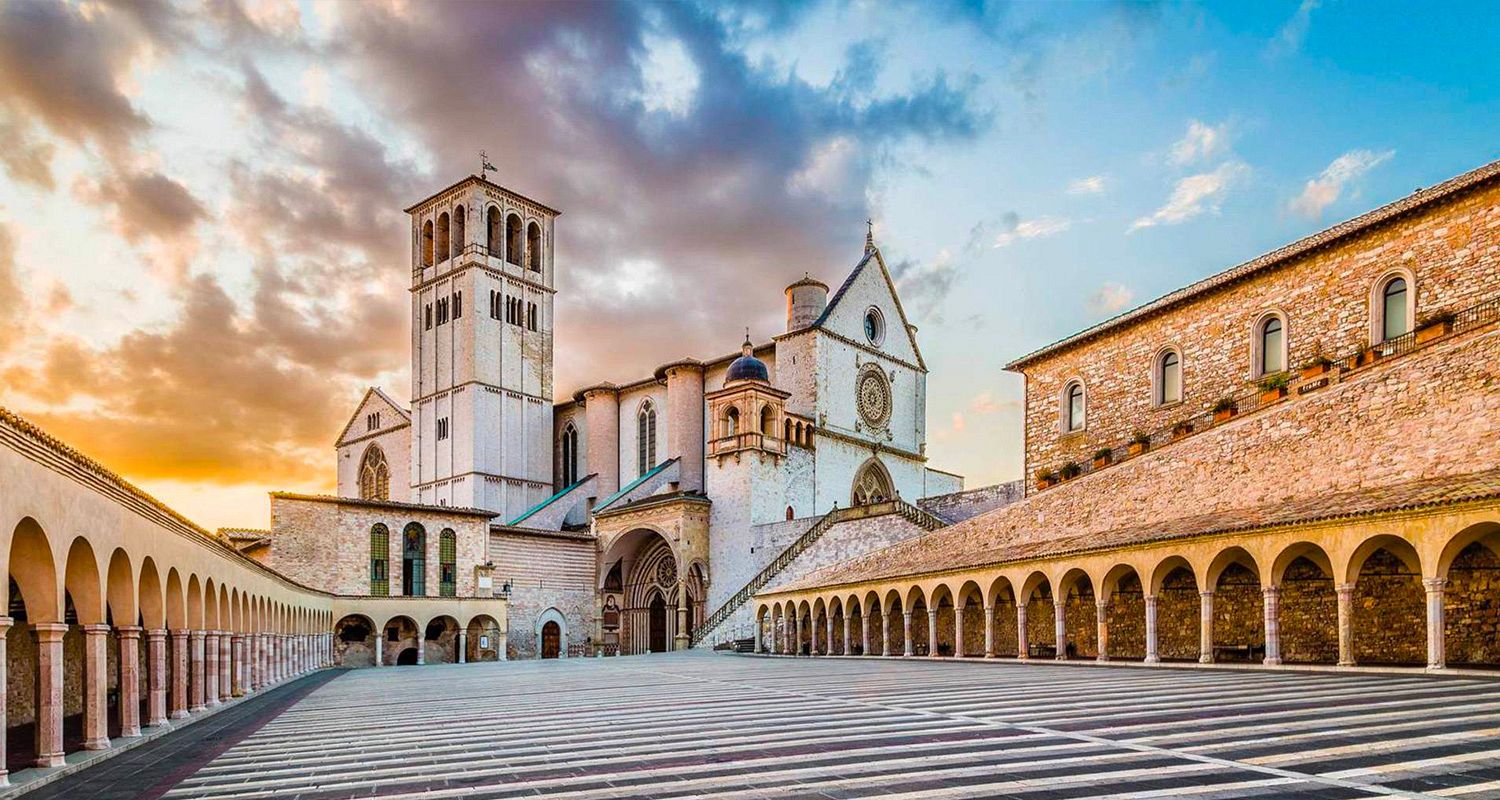 From Florence to Rome with stop in Perugia & Assisi

Your driver will pick you up at your address in FLORENCE,
and he’ll drive you to ROME via ASSISI AND PERUGIA.

The first stop will be at Basilica of Santa Maria degli Angeli (St. Mary of the Angels), which houses the Porziuncola.
According to a legend, the existence of which can be traced back with certainty only to 1645, the little chapel of Porziuncola was erected under Pope Liberius (352-66) by hermits from the Valley of Josaphat, who had brought thither relics from the grave of the Blessed Virgin. The same legend relates that the chapel passed into the possession of St. Benedict in 516. It was known as Our Lady of the Valley of Josaphat or of the Angels -- the latter title referring, according to some, to Our Lady's ascent into heaven accompanied by angels (Assumption B.M.V.); a better founded opinion attributes the name to the singing of angels which had been frequently heard there.
This little church was given around 1208 to St. Francis by the Abbot of St. Benedict of Monte Subasio, on condition of making it the mother house of his religious family. It was in bad condition, laying abandoned in a wood of oak trees. He restored it with his own hands. In this church, on 24 February 1208, St. Francis heard the call of Jesus and had to make his choice of life: a life in absolute poverty according to the Missionary Discourse in the Gospel of Matthew 10, 5-15.
This little church became the home of St. Francis and soon of his first disciples. In this church St. Francis founded the Order of Friars Minor and from that moment it has never been abandoned by the friars.

After this visit in ten minutes you’ll be in ASSISI.

Around 1000 BC a wave of immigrants settled in the upper Tiber valley as far as the Adriatic Sea and also in the neighbourhood of Assisi. These were the Umbrians, living in small fortified settlements on high ground. From 450 BC these settlements were gradually taken over by the Etruscans. The Romans took control of central Italy by the Battle of Sentinum in 295 BC. They built the flourishing municipium Asisium on a series of terraces on Mount Subasio. Remains from these Roman times can still be found in Assisi : city walls, the forum (now Piazza del Comune), a theatre, an amphitheatre and the Temple of Minerva (now transformed into the Church of Santa Maria sopra Minerva).
In 238 AD Assisi was converted to Christianity by bishop Rufino, who was martyred at Costano. According to tradition, his remains rest in the Cathedral Church of San Rufino in Assisi. The Ostrogoths of king Totila destroyed most of the town in 545. Assisi then came under the rule of the Lombards and later the Frankish Duchy of Spoleto. The thriving city became an independent Ghibelline commune in the 11th century. Constantly struggling with the Guelph Perugia, it was during one of those battles, the battle at Ponte San Giovanni, that Francesco di Bernardone, (Saint Francis of Assisi), was taken prisoner, setting in motion the events that eventually led him to live as a beggar, renounce the world and establish the Order of Friars Minor.
The Rocca Maggiore, the imperial fortress on top of the hill above the city, was plundered by the people in 1189, but rebuilt in 1367 on orders of the papal delegate, cardinal Gil de Albornoz. The city, which had remained within the confines of the Roman walls, began to expand outside these walls in the 13th century. In this period the city was under papal jurisdiction. In the beginning Assisi fell under the rule of Perugia and later under several despots, such as the soldier of fortune Biordo Michelotti, Gian Galeazzo Visconti, duke of Milan, Francesco I Sforza, another duke of Milan, Jacopo Piccinino and Federico II da Montefeltro, lord of Urbino. The city went into a deep decline through the plague of the Black death in 1348 AD.
The city came again under papal jurisdiction under the rule of Pope Pius II (1458-1464).
In 1569 construction was started of the Basilica of Santa Maria degli Angeli. During the renaissance and later centuries, the city continued to develop peacefully, attested by the 17th-century palaces of the Bernabei and Giacobetti.
Now the site of many a pilgrimage, Assisi is linked in legend with its native son, St. Francis. The gentle saint founded the Franciscan order and shares honors with St. Catherine of Siena as the patron saint of Italy. He is remembered by many, even non-Christians, as a lover of nature (his preaching to an audience of birds is one of the legends of his life).
Assisi was hit by the devastating twin earthquakes that shook Umbria in 1997, but the recovery and restoration have been remarkable, although much remains to be done. Massive damage was caused to many historical sites, but the major attraction, the Basilica di San Francesco, reopened less than two years later.
The Basilica of San Francesco d'Assisi (St. Francis) is a World Heritage Site. The Franciscan monastery, il Sacro Convento, and the lower and upper church (Basilica inferiore e superiore) of St Francis were begun immediately after his canonization in 1228, and completed 1253. The lower church has frescos by renowned late-medieval artists Cimabue and Giotto; in the Upper church are frescos of scenes in the life of St. Francis by Giotto and his circle. The Basilica was badly damaged by the earthquake of September 26, 1997. Part of the vault collapsed, killing four people inside the church and carrying with it a fresco by Cimabue. The edifice and was closed for two years for restoration.
Santa Maria Maggiore (St. Mary the Greater), the earliest extant church. The Cathedral of San Rufino (St. Rufinus), with a Romanesque façade with three rose windows and a 16th-century interior; part of it is built on a Roman cistern.
Basilica of Santa Chiara (St Clare) with its massive lateral buttresses, rose window, and simple Gothic interior, begun in 1257, contains the tomb of the saint and 13th-century frescoes and paintings.

After that we’ll move to PERUGIA.

For our experience is better to dedicate more time in ASSISI. Perugia is the capital city of the region of Umbria in central Italy, near the Tiber river, and the capital of the province of Perugia. The city symbol is the griffin, which can be seen in the form of plaques and statues on buildings around the city.
Perugia is a notable artistic center of Italy. The famous painter Pietro Vannucci, nicknamed Perugino, was a native of Perugia. He decorated the local Sala del Cambio with a beautiful series of frescoes; eight of his pictures can also be admired in the National Gallery of Umbria. Perugino was the teacher of Raphael, the great Renaissance artist who produced five paintings in Perugia (today no longer in the city) and one fresco. Another famous painter, Pinturicchio, lived in Perugia. Galeazzo Alessi is the most famous architect from Perugia. Perug
ia has become famous for chocolate, mostly because of a single firm, Perugina, whose Baci (kisses) are widely exported. Perugian chocolate is very popular in Italy, and the city hosts a chocolate festival every October.
Perugia today hosts two main universities, the ancient Università degli Studi and the Foreigners University (Università per Stranieri). Stranieri serves as an Italian language and culture school for students from all over the world. Other educational institutions are the Perugia Fine Arts Academy "Pietro Vannucci" (founded in 1573), the Perugia Music Conservatory for the study of classical music, and the RAI Public Broadcasting School of Radio-Television Journalism. The city is also host to the Umbra Institute, an accredited university program for American students studying abroad. The Università dei Sapori (University of Tastes), a National centre for Vocational Education and Training in Food, is located in the city as well. Proceed to ROME, end our services.

NOTICE: We can do the transfer also in the opposite way from ROME to FLORENCE, via ASSISI and PERUGIA.