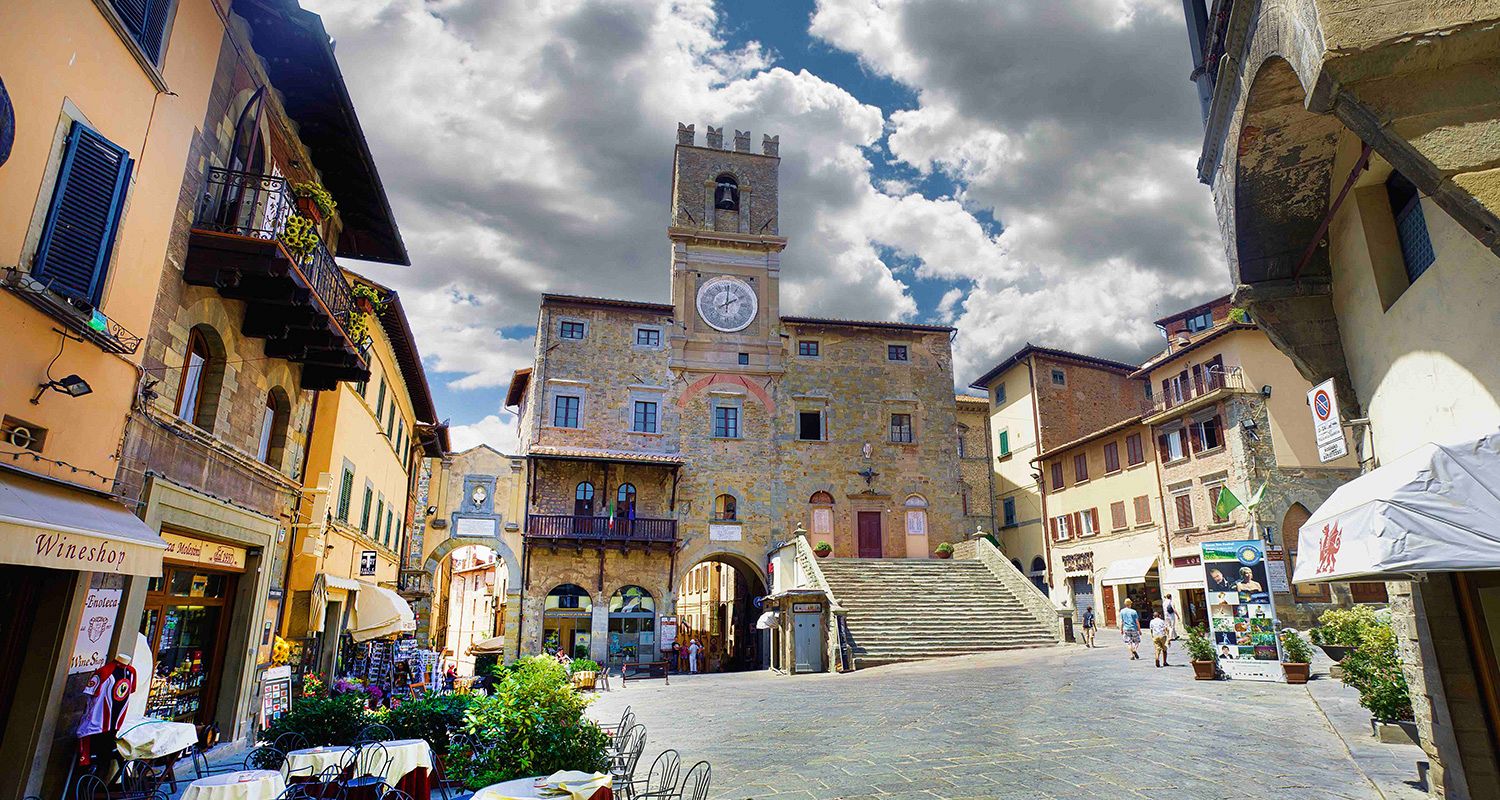 Your driver will pick you up at your hotel
or apartment in FLORENCE
and he'll drive you to CORTONA.

Cortona and Tuscany are the subject of several highly readable books by Frances Mayes wrote about renovating are house in the area where she still lives for part of the year. These books give a highly authentic impression of life in this part of Italy. One of her books, Under the Tuscan Sun was made into a popular movie.
Cortona is a small but fascinating city in the province of Arezzo, Tuscany, central Italy, situated on a commanding hill, and overlooking Lake Trasimeno. Its cyclopean walls, still in great part preserved, are said to be 3000 years old. It was one of the twelve cities of Etruria and in its vicinity many ruins and Etruscan tombs maybe seen. Cortona took part in all the wars against Rome until 310 B.C. when Fabius Rullianus defeated the Etruscans and took Perugia. Perugia, with other cities including Cortona, then made peace with Rome. Later Cortona was destroyed by the Lombards but was soon rebuilt. In the fourteenth century it was governed by the Casali and afterwards became part of the Grand Duchy of Tuscany. Many famous men were born or lived in Cortona: Brother Elias (Elia Coppi), the famous companion of St. Francis of Assisi, and later Vicar-General of the Franciscan Order; Cardinals Egidio Boni and Silvio Passerini; the painter Luca Signorelli; the architect and painter Pietro Berrettini (Pietro da Cortona). St. Margaret of Cortona (1248-97) was born at Laviano (Alviano) in the Diocese of Chiusi, and became the mistress of a nobleman of the vicinity. On discovering his body after he had met a violent death, she repented and, after a public penance, retired to Cortona, where she took the habit of a Tertiary of St. Francis and devoted her life to works of penance and charity. There still exist in Cortona religious works due to her zeal. Leo X permitted her veneration at Cortona, and Urban VIII extended the privilege to the Franciscan Order. Benedict XIII canonized her in 1728. Her body rests in a beautiful sarcophagus in the church dedicated to her at Cortona. It is not known whether Cortona was an episcopal see previous to its destruction by the Lombards. From that time until 1325 it belonged to the Diocese of Arezzo. In that year, at the request of Guglielmo Casali, John XXII raised Cortona to episcopal rank, as a reward for the fidelity of its Guelph populace, Arezzo remaining Ghibelline. The first bishop was Rainerio Ubertini. Other bishops were Luca Grazio, who was a distinguished member of the Council of Florence (1438); Matteo Concini (1560) and Gerolamo Gaddi (1562) were present at the Council of Trent. The cathedral and the other churches of Cortona possess numerous works of art, especially paintings of the school of Luca Signorelli and of Fra Angelico.

After the visit of CORTONA we'll proceed to GUBBIO

The city's origins are very ancient: as Ikuvium, it was an important town of the ancient Umbrian people in pre-Roman times, and is famous for the discovery there of the Eugubine (or Iguvine) Tables, a set of bronze tablets that together constitute the largest surviving text in ancient Umbrian. After the Roman conquest in the 2nd century BC - it kept its name with only a slight change (Iguvium) - the city remained important, as attested by its Roman theater, the second-largest surviving in the world.
Gubbio became very powerful in the beginning of the Middle Ages. The town sent 1000 knights to fight in the First Crusade under the lead of Count Girolamo Gabrielli, and according to an undocumented tradition, they were the first to penetrate into the Holy Sepulchre when the city was seized (1099).
The following centuries were quite turbulent and Gubbio was engaged in wars against the surrounding towns of Umbria. One of these wars saw the miraculous intervention of its bishop, Saint Ubaldo Baldassini, who secured Gubbio an overwhelming victory (1151) and a period of prosperity.
In 1350 Giovanni Gabrielli, count of Borgovalle, a member of the noblest family of Gubbio, seized the power and became lord of Gubbio. However his rule was short and he was forced to hand over the town to Cardinal Albornoz, representing the Church (1354).
A few years later, Gabriello Gabrielli, bishop of Gubbio, proclaimed himself again lord of Gubbio (Signor d'Agobbio). Betrayed by a group of noblemen which included many a relative of his, the bishop was forced to leave the town and seek refuge at his home castle at Cantiano.
With the decay of the political prestige of the Gabrielli family, Gubbio was thereafter incorporated into the Montefeltro State, and eventually became part of the Papal States when this family extinguished (1631).
In 1860 Gubbio was incorporated into the Kingdom of Italy along with the rest of the Papal States.
The historical center of Gubbio is of decidedly medieval aspect: the town is austere in appearance because of the dark grey stone, narrow streets, and Gothic architecture.
A fair number of the houses in Gubbio date to the 14th and 15th centuries, and were originally the dwellings of wealthy merchants; they often have a second door fronting on the street, usually just a few inches from the main entrance. This secondary entrance is narrower, and a foot or so above the actual street level. This type of door is called a porta dei morti (door of the dead) because it is commonly stated that it was used only for removing the bodies of any who might have died inside the house. This is almost certainly false, but there is no firm agreement on the true purpose of the secondary doors. One of the most likely theories is that the door was used by the owners to protect themselves when opening to unknown persons, leaving them in a dominating position.

The main monuments of the city include:

The Roman Theatre, built in the 1st century BC using square blocks of local limestone. Originally, the diameter of the cavea was 70 meters. During summer it is used for lectures about ancient poets and authors.

The Roman Mausoleum (sometimes said to be of Pomponius Graecinus, but on no satisfactory grounds)

The massive Palazzo dei Consoli (first half of the 14th century), housing the museum with the Eugubine Tables.

The Palazzo and Torre Gabrielli

The Duomo (Cathedral), built in the late 12th century. The most striking feature is the rose-window in the facade with, at its sides, the symbols of the Evangelists: the eagle for St. John, the lion for St. Mark, the angel for St. Matthew and the ox for St. Luke. The interior has latine cross plan with a single nave. The most precious art piece is the wooden Christ over the altar, of Umbrian school.

The Palazzo Ducale, built from 1470 by Luciano Laurana or Francesco di Giorgio Martini for Federico da Montefeltro. Famous is the inner court, reminiscent of the Palazzo Ducale of Urbino. The ducal studiolo, with carved wooden panels is now at the Metropolitan Museum in New York.

The Church of S. Francesco (second half of the 13th century), the sole religious edifice in the city having a nave with two aisles. The vaults are supported by octagonal pilasters. The frescoes in the left side date from the 15th century.

The Church of Santa Maria Nuova, a typical Cistercian edifice of the 13th century. In the interior is a 14th century fresco portraying the so-called Madonna del Belvedere (1413), by Ottaviano Nelli. It also has a work by Guido Palmerucci. Also from the Cistercians is the Convent of St. Augustine, with some frescoes by Nelli.

The Basilica of Sant'Ubaldo, with a nave and four aisles is a sanctuary outside the city. Noteworthy are the marble altar and the great windows with episodes of the life of St. Ubaldo, parton of Gubbio. The finely sculpted portals and the fragmentary frescoes give a hint of the magnificent 15th century decoration once boasted by the basilica.

The Museo Cante Gabrielli in the Palazzo del Capitano del Popolo (which once belonged to the Gabrielli).