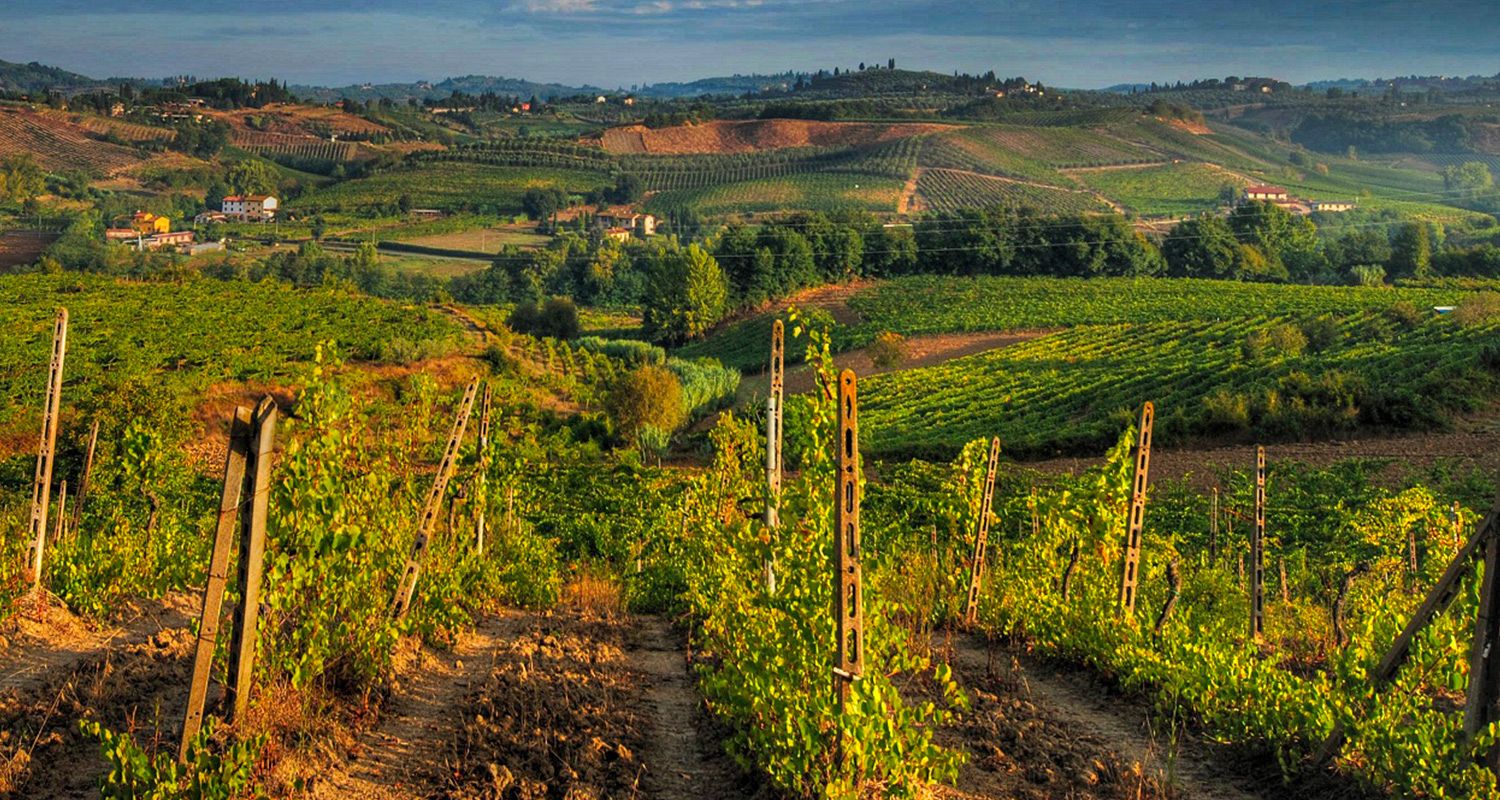 This tour takes you to the main villages of the Chianti Classico wine region.
We'll drive the SS 222 or Chiantigiana, the scenic road.

The first stop is in Greve in Chianti where you can see the beautiful Piazza del mercato with its characteristic little stores.
Greve in Chianti (the old name was Greve; in 1972 was renamed Greve in Chianti after the inclusion of that area in the Chianti wine district) is a town and comune (municipality) in the province of Florence, Tuscany, Italy. It is located c. 31 km south of Florence, and 42 km north of Siena.
Sitting in the Val di Greve, it is named for the small, fast-flowing river that runs through it, is the principal town in the Chianti wine district which stretches south of Florence to just north of Siena. Until recently it has been a quiet, almost bucolic town because it was, and still is, well off the main roads.
Even in ancient days Greve was not isolated because it was well-connected by secondary roads to the Via Volterrana and via Francigena. Nowadays, it is connected to the A1 between Florence and Rome and the main road between Florence and Siena. The old road network ensured easy access to Florence and to other places such as Figline where its tradesmen and farmers found ready markets for their goods and produce. The modern transportation network connects it to the world at large, enabling it to export great quantities of wine, and import vast quantities of tourists.
The site of Greve and the surrounding territory has been long settled, probably well before the Etruscans and then the Romans dominated the area. Historical documents of the 11th century refer to an ancient monastic settlement on a nearby hill, which is now called the hill of San Francesco. Before the Franciscans established their monastery in the 15th century, an earlier monastery dedicated to Santo Savi had already been built, and also a small hospital. Larger scale settlement occurred in the 13th and 14th centuries.
Although an independent town for most of its history, Greve ultimately came under Florentine control and remained so until the Grand Duchy of Florence was absorbed into the unifited Kingdom of Italy in 1861.
The Franciscan monastery is still at the heart of the old part of the city, as is the triangular main piazza, where a market has been running more or less continuously for centuries serving the nearby castle communities and hamlets.
The piazza is fronted by numerous medieval aged buildings, including the 11th century Chiesa Santa Croce which was rebuilt in 1325 after being burned to the ground, along with the rest of the town, by the Duke of Lucca, Castruccio Castracani. After further renovation, the church, which houses paintings of the school of Fra Angelico, now features a neo-classical facade. In the piazza there is also a monument to the discoverer of New York harbor, Giovanni da Verrazzano (1485-1528), who was born nearby.
In the frazione of Montefioralle is the church of Santo Stefano, with a late 13th century Madonna with Child and a 15th century Trinity and Saints. Also in the hamlet is a house which, according to the tradition, belonged to other explorer Amerigo Vespucci. In the nearby is a Romanesque Pieve with narthexed façade and two mullioned windows.
At 2 km from the centre of Greve is the castle of Verrazzano, sitting on a 348 m-high hill. Built probably by the Lombards, it was a possession of the explorer's family, and in the 17th century was turned into a villa. Of the 13th century manor a tower remains.
With the enlargement of the Chianti wine district in 1932, Greve suddenly found itself in a noble wine area. The Chianti region supports a variety of agricultural activities, most especially the growing of the grapes that go into the world-famous Chianti and "Super Tuscan" wines. Olive oil production is another staple of the local economy. Extra virgin Tuscan olive oil is highly prized for its delicate flavor, as opposed to the stronger, thicker olive oils of the south. Truffle harvesting is a distinguishing feature of local food production. Both black and white truffles are hunted in Chianti. The region is also noted for its meat. The Cinta Senese pig is unique to this region and produces pork of superior quality. Wild game is a common feature on local menus, including rabbit, pigeon, venison, and, especially, cinghiale (wild boar). Greve is home to one of Italy's oldest and most renowned butcher shops, the Macelleria Falorni.
Due largely to this intense agricultural activity, and the wine and food production industries that have been built on top of it, since early medieval times, Greve evolved as the principal market town at the center of an (increasingly) densely populated area with an abundance of villages, parish churches, villas and castles. The latter were built mostly by the rich merchants and noble classes of Florence who enjoyed the country life, and developed their estates to earn additional income and also to supply their in-town tables.
The town of Greve's busy quaintness and the lushness and diversity of the undulating landscape which surrounds it, have long attracted tourists and travelers. The current flow of tourism to the area and the purchase of homes by both Italians and foreigners, is fully integrated with viniculture, wine-making and various related enterprises to form a highly integrated and highly productive local economy.
The trip continues towards Panzano, Castellina, characteristic towns in the Florentine Chianti region. Immerse yourself in the charming Tuscan countryside and its ancient traditions. Country people, simple and delicious food, pure, natural products, and fabulous wine. Helps you forget your worries and transports you back to a simpler time and slower way of life.

Castellina in Chianti is a comune (municipality) of c. 2,800 inhabitants in the province of Siena, in the Italian region Tuscany, located about 35 km south of Florence and about 15 km northwest of Siena. It is part of the Chianti Hills, between the valleys of the Arbia, Pesa and Elsa rivers.
The territory of Castellina in Chianti borders the following municipalities: Barberino Val d'Elsa, Castelnuovo Berardenga, Greve in Chianti, Monteriggioni, Poggibonsi, Radda in Chianti, Tavarnelle Val di Pesa.
The first settlements in the area dates from the Etruscan age, and they were probably devastated by Gaulish invasions at the time of the latter's invasions against Rome. In the early Middle Ages the town was known as Salingolpe; in the 11th century Matilda of Tuscany gave it as fief to the counts Guidi and, subsequently, to the Trebbio. In the early 15th century it became a strong fortress, of which today the Rocca remain. On the way back we’ll stop in MONTERIGGIONI

Monteriggioni is a commune in the Province of Siena in the Italian region Tuscany. It borders on the communes of Casole d'Elsa, Castellina in Chianti, Castelnuovo Berardenga, Colle di Val d'Elsa, Poggibonsi, Siena and Sovicille. Sitting on a small natural hillock, this completely walled medieval town in the Siena Province of Tuscany was built in the 13th century by the overlords of Siena to command the Cassia Road running through the Val d'Elsa and Val Staggia just to the west of Monteriggioni. Today, the town of Monteriggioni is the principal center in the modern Comune of Monteriggioni which encompasses 19.49 square kilometers in the area around the town. Distances from other major towns and cities are: Siena 15 km; Volterra - 39 km; Florence 50 km; Pisa 157 km; Lucca - 123 km; Arezzo - 121 km; Rome - 250 km Except for some work done in the 16th century, very little work has been done to Monteriggioni's walls or buildings since they were first erected. So, Monteriggioni's walls and the buildings that make up the town within are the best preserved example of their kind in all of Italy, so it is not surprising that it attracts busses full of tourists, but also architects, and medieval historians and archaeologists. The town served as a defensive fortification that played a vital role in the on-going conflicts between Siena and Florence during the Middle Ages when Florence was driving hard to increase its territory. Over the years, Monteriggioni successfully withstood many attacks from the Fiorentini and a few from forces under the command of the Bishop of Volterra which also asserted dominion over the area). What Florence could not do by force, it ultimately achieved by guile. The Sienese had placed control of the town's garrison in the hands of Giovannino Zeti, who had been exiled from Florence. Reconciling with the Medicis in 1554, in what is known in Monteriggioni as the "great betrayal", he simply handed the keys of the town over to the Medicean forces. The more or less circular walls with a total length of about 570 meters were built between 1213 and 1219, following the natural contours of the hill. There are fourteen towers on square bases set at equidistance, and two portals or gates. One gate, the Porta Fiorentina opens toward Florence to the north, and the other, the Porta Romana, faces Rome to the south. The main street within the walls connects the two gates in a more or less straight line. The main piazza, the Piazza Roma, is dominated by a Romanesque church with a simple, plain facade. Other houses, some in the Renaissance style, once owned by local nobles, gentry and wealthy merchants facing into the piazza. Off the main piazza smaller streets give way to public gardens fronted by the other houses and small businesses of the town. Back in more hostile times, these gardens provided vital sustenance when enemies gathered without.