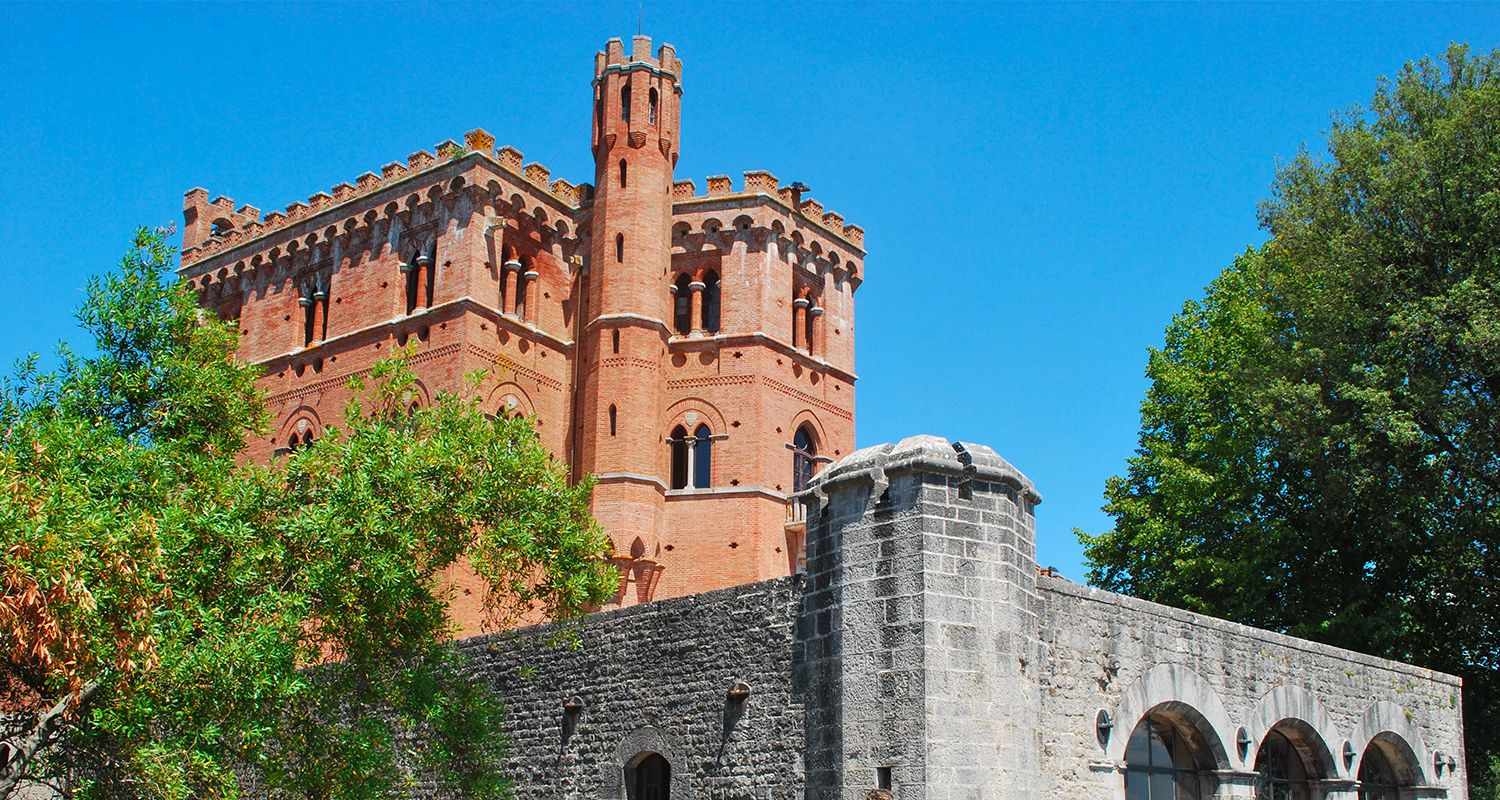 From Florence we’ll drive you through this beautiful experience

We’take the A1 to MONTEVARCHI and then we’ll start to drive the beautiful “castles road”, and we’ll stop in MELETO with its good wine production, BROLIO and we’ll get to BADIA A COLTIBUONO.
Badia a Coltibuono is located in the Chianti zone of Tuscany near the town of Gaiole in Chianti. This monastery, founded in 1051, was owned by the Vallumbrosan order of Benedictine monks until 1810. In the 15th century, the "Buon Raccolto" ("Good harvest") Abbey was extensively developed under the patronage of Lorenzo dei Medici. It was subsequently transformed into a farmhouse-villa, and has retained its agricultural function ever since. The abbey garden, which has been radically restored in recent decades, is laid out in the form of the ancient hortus conclusus, or "enclosed garden", with geometrical box hedge divisions around beds planted with aromatic and medicinal plants. The rectangular pool at the centre of the garden and the paving flags are pietra serena. Some of the outer walks are adorned with long pergolas draped with vines. The impressive Lebanese cedar that stands next to the abbey is 20 m tall and has a trunk with a circumference of 7 m. It is listed in the Italian Forestry Commission's census of monumental trees of Tuscany. The property is surrounded by large white fir trees, the result of reforestation work carried out by the monks, which was then continued in the 19th century. The current owners, the Stucchi-Prinetti family, have excelled in publicising their wine and other agricultural products, not least via the successful publications of Lorenza de Medici, wife of Piero Stucchi-Prinetti, on Tuscan cookery. The abbey is one of the attractions featured in the Strada dei Castelli del Chianti (Chianti castles route) tourist promotion of Gaiole, and the abbey church and gardens may be visited as part of a local guided tour and the property houses a well-know restaurant. Both are worth a visit.

After that we’ll proceed to VOLPAIA.

The Castello di Volpaia was built in the 11th century as a fortified village on the Florence/Siena border. Although only part of the original protective walls and two of its six towers are still standing, the medieval layout and buildings within the village are still intact, making Volpaia undoubtedly one of the best preserved villages of its period.
The most important renaissance building is the Church of Sant'Eufrosino. Attributed to Michelozzo, it was deconsecrated in 1932 and declared a National Monument in 1981.
In 1250 Volpaia became an important part of the Lega del Chianti. One of the village's most illustrious families were scientific instrument makers. The family took its surname from the village itself and during the renaissance Benvenuto and Lorenzo della Volpaia became famous. Not only was the latter a friend of Leonardo da Vinci but their instruments are still on view at the Science Museums in Florence and Greenwich, as well as the Adler Planetarium in Chicago and Palazzo Vecchio in Florence.
Throughout the centuries the families who owned the village and its vineyards dedicated themselves to the arts and wine making and thanks to their foresight the village has managed to keep its original architectural features.

We’ll proceed to RADDA IN CHIANTI

Radda in Chianti - This village (53Om, pop: 1,655) is situated on a hill covered with woods and extensive vineyards forming the watershed between the Pesa and Arbia valleys.
Formerly belonging to the Guidi family, it came under Florentine control in 1203. After being fortified in 1400 it was, from 1415 onwards, head of the League of Chianti, and it preserves the remains of its ancient walls.
The structure of the medieval village is still intact; it grew up elliptically around the church of San Nicolò, of 14th century origin and the Palazzo Pretorio. Built about 1415, its facade adorned with the coats of arms of the podestà (chief magistrates), the latter is now the seat of the municipality.
Just outside the village, in the Vignale farm, are the headquarters of the Chianti Classico consortium (its symbol is the black-cockerel, the former emblem of the League of Chianti), and the Centro di Studi Chiantigiani (Centre for Chianti Studies), founded in 1984, with a small library and an archive devoted to the history of Chianti and its agriculture. The Montevertine farm, near the village, houses the small Museo del Chianti, with displays relating to the farming community. .

We’ll proceed to FLORENCE with a stop in GREVE IN CHIANTI.

Greve in Chianti (the old name was Greve; in 1972 was renamed Greve in Chianti after the inclusion of that area in the Chianti wine district) is a town and comune (municipality) in the province of Florence, Tuscany, Italy. It is located c. 31 km south of Florence, and 42 km north of Siena.
Sitting in the Val di Greve, it is named for the small, fast-flowing river that runs through it, is the principal town in the Chianti wine district which stretches south of Florence to just north of Siena. Until recently it has been a quiet, almost bucolic town because it was, and still is, well off the main roads.
Even in ancient days Greve was not isolated because it was well-connected by secondary roads to the Via Volterrana and via Francigena. Nowadays, it is connected to the A1 between Florence and Rome and the main road between Florence and Siena. The old road network ensured easy access to Florence and to other places such as Figline where its tradesmen and farmers found ready markets for their goods and produce. The modern transportation network connects it to the world at large, enabling it to export great quantities of wine, and import vast quantities of tourists.
The site of Greve and the surrounding territory has been long settled, probably well before the Etruscans and then the Romans dominated the area. Historical documents of the 11th century refer to an ancient monastic settlement on a nearby hill, which is now called the hill of San Francesco. Before the Franciscans established their monastery in the 15th century, an earlier monastery dedicated to Santo Savi had already been built, and also a small hospital. Larger scale settlement occurred in the 13th and 14th centuries.
Although an independent town for most of its history, Greve ultimately came under Florentine control and remained so until the Grand Duchy of Florence was absorbed into the unifited Kingdom of Italy in 1861.
The Franciscan monastery is still at the heart of the old part of the city, as is the triangular main piazza, where a market has been running more or less continuously for centuries serving the nearby castle communities and hamlets.
The piazza is fronted by numerous medieval aged buildings, including the 11th century Chiesa Santa Croce which was rebuilt in 1325 after being burned to the ground, along with the rest of the town, by the Duke of Lucca, Castruccio Castracani. After further renovation, the church, which houses paintings of the school of Fra Angelico, now features a neo-classical facade. In the piazza there is also a monument to the discoverer of New York harbor, Giovanni da Verrazzano (1485-1528), who was born nearby.
In the frazione of Montefioralle is the church of Santo Stefano, with a late 13th century Madonna with Child and a 15th century Trinity and Saints. Also in the hamlet is a house which, according to the tradition, belonged to other explorer Amerigo Vespucci. In the nearby is a Romanesque Pieve with narthexed façade and two mullioned windows.
At 2 km from the centre of Greve is the castle of Verrazzano, sitting on a 348 m-high hill. Built probably by the Lombards, it was a possession of the explorer's family, and in the 17th century was turned into a villa. Of the 13th century manor a tower remains.
With the enlargement of the Chianti wine district in 1932, Greve suddenly found itself in a noble wine area. The Chianti region supports a variety of agricultural activities, most especially the growing of the grapes that go into the world-famous Chianti and "Super Tuscan" wines. Olive oil production is another staple of the local economy. Extra virgin Tuscan olive oil is highly prized for its delicate flavor, as opposed to the stronger, thicker olive oils of the south. Truffle harvesting is a distinguishing feature of local food production. Both black and white truffles are hunted in Chianti. The region is also noted for its meat. The Cinta Senese pig is unique to this region and produces pork of superior quality. Wild game is a common feature on local menus, including rabbit, pigeon, venison, and, especially, cinghiale (wild boar). Greve is home to one of Italy's oldest and most renowned butcher shops, the Macelleria Falorni.
Due largely to this intense agricultural activity, and the wine and food production industries that have been built on top of it, since early medieval times, Greve evolved as the principal market town at the center of an (increasingly) densely populated area with an abundance of villages, parish churches, villas and castles. The latter were built mostly by the rich merchants and noble classes of Florence who enjoyed the country life, and developed their estates to earn additional income and also to supply their in-town tables.
The town of Greve's busy quaintness and the lushness and diversity of the undulating landscape which surrounds it, have long attracted tourists and travelers. The current flow of tourism to the area and the purchase of homes by both Italians and foreigners, is fully integrated with viniculture, wine-making and various related enterprises to form a highly integrated and highly productive local economy.